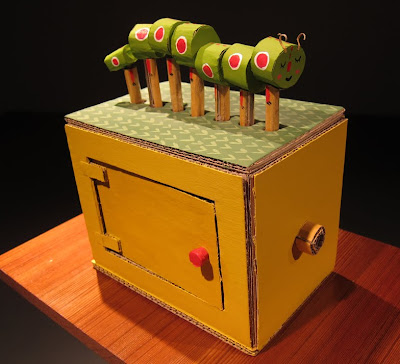 This was a project done last semester where the requirement was to work with cardboard. I decided to attempt to create an automaton, which is self-operating mechanical toy. I was really interested in Alexander Calder's pull toys and circus, and the basis of my work for that class dealt with play and interaction.
It took a little toying around with before I got the mechanics right, but here it is! I think it was really successful for what I was wanting out of this project. I made something functional! It's entirely constructed with cardboard with the exception of the little sticks that support the caterpillar's segments (they are wooden dowel rods covered in cardboard) and the adhesive materials, which were glue and tape.

Here's a video of the caterpillar in ACTION! --> "Caterpillar Automaton"
ps. embarassin, there's music playin in it.